Photographs and titles of movies provide links to film trailers.  Days and times for the screening of these films are noted below.  A complete Festival schedule is available by choosing the schedule menu at the top of the page. 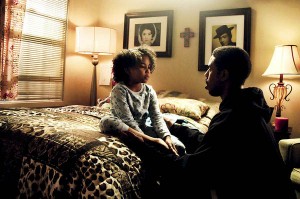 “The movie is modest in its ambition and powerful in its reverberations. It takes Oscar Grant’s story and makes it universal – and transforms a sometimes awkward and obvious movie into a work of art.”

Winner of both the Grand Jury Prize for dramatic feature and the Audience Award for U.S. dramatic film at the 2013 Sundance Film Festival, director Ryan Coogler’s “Fruitvale Station” follows the true story of Oscar Grant (Michael B. Jordan), a 22-year-old Bay Area resident who wakes up on the morning of December 31, 2008 and feels something in the air. Not sure what it is, he takes it as a sign to get a head start on his resolutions: being a better son to his mother (Octavia Spencer), whose birthday falls on New Year’s Eve, being a better partner to his girlfriend Sophina (Melonie Diaz), who he hasn’t been completely honest with as of late, and being a better father to Tatiana (Ariana Neal), their beautiful four year-old daughter. Crossing paths with friends, family, and strangers, Oscar starts out well, but as the day goes on, he realizes that change is not going to come easily. His resolve takes a tragic turn, however, when BART officers shoot him in cold blood at the Fruitvale subway stop on New Year’s Day. Oscar’s life and tragic death would shake the Bay Area – and the entire nation – to its very core.

“[Director Ryan] Coogler, a 27-year-old Bay Area native who went to film school at the University of Southern California, examines his subject with a steady, objective eye and tells his story in the key of wise heartbreak rather than blind rage. It is not that the movie is apolitical or disengaged from the painful, public implications of Mr. Grant’s fate. But everything it has to say about class, masculinity and the tricky relations among different kinds of people in a proudly diverse and liberal metropolis is embedded in details of character and place.”                         — A. O. Scott, New York Times, July 11, 2013

Fruitvale Station screens Friday, Saturday, and Sunday at 9:15pm; Sunday at 3:00pm; and Wednesday at 7:00pm 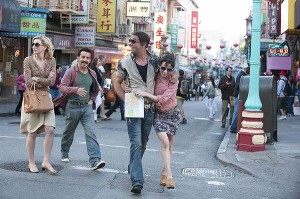 “When Cate Blanchett first cruises into Woody Allen’s “Blue Jasmine,” playing a Park Avenue matron fallen on hard times, she looks like a million bucks. She’s wearing pearls and a white Chanel jacket, with an Hermès bag as big as a Shetland pony hanging off one arm. It’s the sort of important accessory worn by women accustomed to being chauffeured around town. Soon after, though, as she stands with her monogrammed luggage on a nondescript San Francisco sidewalk, she looks frightened, alone — like someone who could benefit from some kindness. Instead, she waves off a stranger and, posing a question that’s as existential as it is practical, demands, “Where am I, exactly?”

She’s in the Mission, for starters, but Jasmine French — this lost, lonely woman brilliantly brought to quivering life by Ms. Blanchett — is more properly in a Woody Allen movie, his most sustained, satisfying and resonant film since “Match Point.” A moral fable about greed and comeuppance, crimes and misdemeanors, “Blue Jasmine,” begins with a socialite brought low and evolves into a tragedy that becomes greater than one woman’s tragedy.  It’s a familiar story with a few of the usual suspects, starting with the husband, Hal (a perfect Alec Baldwin, all smile and no soul), an investment type who has talked high yields all the way to prison. The government took him, and then it took the rest, leaving Jasmine with little more than her designer threads and luggage. [Inspired by Tennessee Williams’ Streetcar Named Desire, Allen reimagines] Blanche by way of another figure who changes depending on how you hold her up to the light, Ruth Madoff, the wife of Bernard L. Madoff, the investor turned avatar of a fallen world. It’s a masterly stroke that puts Jasmine’s dissembling into fresh, chilling perspective. ”                                                             — Manohla Dargis, New York Times, July 25, 2013

In his first lead role after decades of playing supporting characters, James Cromwell gives a tour de force performance in Still Mine, an exquisitely crafted and deeply affecting love story about a couple in their twilight years. Based on true events and laced with wry humor, “Still Mine” tells the heartfelt tale of Craig Morrison (Academy Award nominee Cromwell), who comes up against the system when he sets out to build a more suitable house for his ailing wife Irene (Academy Award nominee Geneviève Bujold). Although Morrison uses the same methods his father, an accomplished shipbuilder, taught him, times have changed. He quickly gets blindsided by local building codes and bureaucratic officials. As Irene becomes increasingly ill – and amidst a series of stop-work orders – Craig races to finish the house.  Hauled into court and facing jail, Craig takes a final stance against all odds in a truly inspirational story.

The Way, Way Back 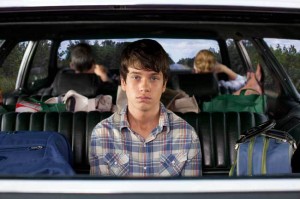 “Why are so many coming-of-age movies set in the summer?   Because that’s when teenagers have certain freedom to pursue love . . .”

“Though it takes place in what looks like the present — the familiar now of ear buds and smartphones — “The Way, Way Back,” a summertime coming-of-age tale written and directed by Nat Faxon and Jim Rash, is infused with nostalgia. The movie’s title seems to refer to the rear-facing third seat of the massive old station wagon where we first encounter its hero, a glum 14-year-old boy named Duncan (Liam James). But it also describes a hazy, bittersweet mood of recollection that hovers around the action like July humidity. In addition to that vintage car, there are a battered water park and an antique Pac-Man machine, at the controls of which Duncan meets Owen (Sam Rockwell), who will become his mentor and confidant. Owen, who manages the park, is the more sympathetic of the two surrogate fathers who dominate Duncan’s days and fight, implicitly, for his young soul. The bad dad is Trent (Steve Carell), the owner of the station wagon and the rambling beach house where Duncan and his mother, Pam (Toni Collette), Trent’s girlfriend, are spending their vacation. Part of the charm of beach towns is that they change relatively slowly, so it is easy enough, as I suspect the filmmakers have done, to peel back the years and find your own experiences in Duncan’s.”
— A.O. Scott, New York Times, July 4, 2013

Directed and written by Nat Faxon and Jim Rash and starring Steve Carell, Toni Collette, Sam Rockwell, and Allison Janney.  The Way, Way Back screens Friday, Sunday, Tuesday, and Thursday at 7:00pm and on Saturday at 1:00pm. 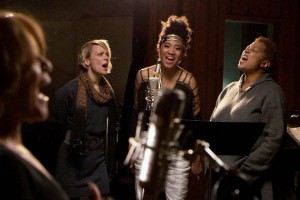 “Just about everything in this movie is right. And anybody who gives a rip about unsung heroines of popular music and giving credit when credit’s overdue had better come up with a good excuse not to see it.”

Millions know their voices, but no one knows their names. In his compelling new film “20 Feet from Stardom,” award-winning director Morgan Neville shines a spotlight on the untold true story of the backup singers behind some of the greatest musical legends of the 21st century. Triumphant and heartbreaking in equal measure, the film is both a tribute to the unsung voices who brought shape and style to popular music and a reflection on the conflicts, sacrifices and rewards of a career spent harmonizing with others. These gifted artists span a range of styles, genres and eras of popular music, but each has a uniquely fascinating and personal story to share of life spent in the shadows of superstardom. Along with rare archival footage and a peerless soundtrack, “20 Feet from Stardom” boasts intimate interviews with Bruce Springsteen, Stevie Wonder, Mick Jagger and Sting to name just a few. However, these world-famous figures take a backseat to the diverse array of backup singers whose lives and stories take center stage in the film.

Directed by Morgan Neville, and featuring Darlene Love, Merry Clayton, Lisa Fischer, and Tata Vega as themselves.  20 Feet from Stardom screens Saturday at 3:15pm; Saturday and Monday at 7:10pm;  Sunday at 1:15pm

The Kings of Summer 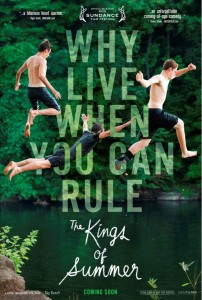 . . . evoking the pleasure of what feels – for a little while – like endless possibilities

“Premiering to rave reviews at the 2013 Sundance Film Festival, The Kings of Summer is a unique coming-of-age comedy about three teenage friends – Joe (Nick Robinson), Patrick (Gabriel Basso) and the eccentric and unpredictable Biaggio (Moises Arias) – who, in the ultimate act of independence, decide to spend their summer building a house in the woods and living off the land. Free from their parents’ rules, their idyllic summer quickly becomes a test of friendship as each boy learns to appreciate the fact that family – whether it is the one you’re born into or the one you create – is something you can’t run away from.

The boys are young enough to be certain their parents are wrong about pretty much everything — and to be confident that they can do it all better.  They’re old enough to carry it off, at first. The house is like something the Lost Boys might build for Peter Pan, with a stolen door from a Port-a-Potty for the entrance and essentials like a mailbox, a slide, a basketball hoop and an air hockey table. But some things are harder than they thought. And of course the most unexpected complication is when a girl comes through the Port-a-Potty door.  Like Henry David Thoreau, another literary icon who dreamed of escaping the oppression of civilization, the boys learn that there is a time to go to the woods, and a time to come home.”   —Neil Minow, Chicago Sun-Times, June 6, 2013