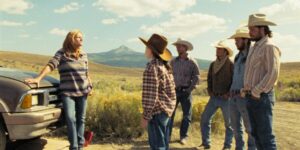 Faye (Dale Dickey) is a lone traveler biding her time fishing, birding and stargazing at a rural Colorado campground as she awaits the arrival of Lito (Wes Studi), a figure from her past who is navigating his own tentative and nomadic journey across the rugged West. Like the country music that has traditionally channeled the heartbreak and resilience of Americans in search of themselves and others, A Love Song weaves a lyrical and ultimately joyful refrain out of the transformative act of being alone — and reminds us that love can nourish and mystify at any age.

“As a viewer, you may leave the theater with more answers than when you arrived — and that’s refreshing. Walker-Silverman has no interest in putting pretty bows on things, loads of past histories or sentimentality.”  Mark Kennedy, Associated Press, July 26, 2022

“Make no mistake: A Love Song is, first and foremost, a love letter to Dickey… It’s the sort of performance that makes you stop taking great actors for granted.”  David Fear, Rolling Stone, July 28, 2022.

“This is a very gentle, low-key humanistic tale told with a lot of subtlety and grace.”  Claudia Puig, NPR, August 5, 2022.

The Phantom of the Open 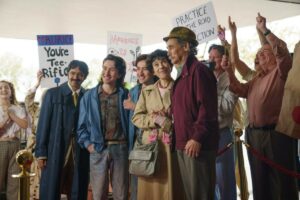 “THE PHANTOM OF THE OPEN tells the heartwarming true story of Maurice Flitcroft (Mark Rylance), a dreamer and unrelenting optimist. This humble crane operator from Barrow-in-Furness managed to gain entry to The British Open Golf Championship qualifying in 1976, despite never playing a round of golf before. He shot the worst round in Open history and drew the ire of the golfing elite, but became a folk hero in the process and, more importantly, showed his family the importance of pursuing your dreams.

“Craig Roberts directs energetically — lots of pop songs, fantasy sequences, trick shots — but the film is made by its casting. Flitcroft is played by Mark Rylance, who brings more charm and humanity to the part than seems possible.” David Sexton, New Statesman, March 16, 2022.

“Despite its light subject matter, “Phantom” is about something more than an obscure British folk hero… It’s a story about following your passion, not because of the heights this path will take you to, but because it makes you happy.” Michael O’Sullivan, June 1, 2022. 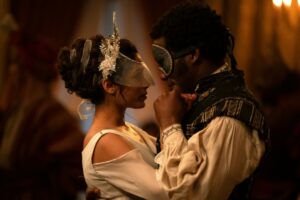 When she fails to meet an item on his list of requirements for a bride, Julia Thistlewaite (Zawe Ashton) is jilted by London’s most eligible bachelor, Mr. Malcolm (Ṣọpẹ́ Dìrísù). Feeling humiliated and determined to exact revenge, she convinces her friend Selina Dalton (Freida Pinto) to play the role of his ideal match. Soon, Mr. Malcolm wonders whether he’s found the perfect woman…or the perfect hoax.

“How calming to spend two hours absolutely knowing, to paraphrase an English writer of a different era, that all will be well that ends well.”  Jocelyn Noveck, Associated Press, July 1, 2022.

Marcel the Shell with Shoes On 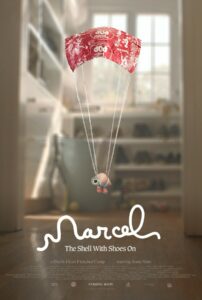 Marcel is an adorable one-inch-tall shell who ekes out a colorful existence with his grandmother Connie and their pet lint, Alan. Once part of a sprawling community of shells, they now live alone as the sole survivors of a mysterious tragedy. But when a documentary filmmaker discovers them amongst the clutter of his Airbnb, the short film he posts online brings Marcel millions of passionate fans, as well as unprecedented dangers and a new hope at finding his long-lost family. A beloved character gets his big-screen debut in this hilarious and heartwarming story about finding connection in the smallest corners.

“Hilarious and extremely sweet… a feel-good movie that’s not like anything you’ve seen before.”  Alissa Wilkinson, Vox, August 5, 2022.

“The movie’s cloying sentimentality is balanced by its imaginative vigor and its wry shell’s-eye view of humanity.” Richard Brody, New Yorker, July 5, 2022. 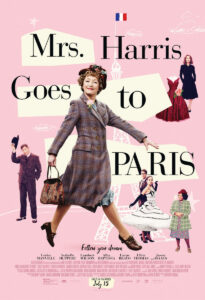 In partnership with the House of Dior, MRS. HARRIS GOES TO PARIS tells the story of a widowed cleaning lady in 1950s London who falls madly in love with a couture Dior dress, and decides that she must have one of her own. After she works, starves and gambles to raise the funds to pursue her dream, she embarks on an adventure to Paris which will change not only her own outlook, but the very future of the House of Dior.

“I was charmed by this unapologetic fairy tale about a cleaning woman who dreams of wearing a beautiful ball gown designed by Christian Dior. Lesley Manville is a marvel, and this film is a lovely vehicle for her—the perfect embodiment of Ada Harris.”  Leonard Maltin, LeonardMaltin.com, July 14, 2022.

“So benign and enjoyable viewers may find themselves uttering one of its heroine’s oft-used refrains, “Oh, that’s lovely.” And for the romantics — not the cynics — in the audience, there is absolutely nothing wrong with that.” Gary M. Kramer, Salon.com, July 14, 2022. 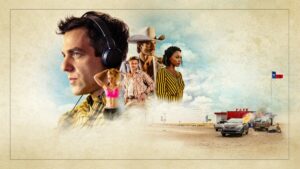 Vengeance, the directorial debut from writer and star B.J. Novak (“The Office”), is a darkly comic thriller about Ben Manalowitz, a journalist and podcaster who travels from New York City to West Texas to investigate the death of a girl he was hooking up with.

“As actor, writer and debuting director, a seriously funny B.J. Novak takes aim at an America broken by disconnection. He doesn’t hit every target, but when he does this tale of a New York liberal battling Texas gun nuts comes alive with mirth and menace.”  Peter Travers, ABC News, July 29, 2022.